The Wolsey Orchestra's Spring concert at the Corn Exchange on Saturday evening continued their theme for this season - Britten and Beyond. Six months ago they celebrated the Britten centenary, then, at their February concert, music from the Americas was featured, and now they returned home with a programme of British music composed during Britten's lifetime.

The concert began with two works from the 1950s and 1960s - the famous Dam Busters March by Eric Coates and Little Suite No.2 composed by Malcolm Arnold, when he was at the peak of his time writing film scores. The Third movement of the latter was a dance notable for its jazzy rhythms featuring the percussion section, especially a prominent part for bongos!

After these pieces by two composers well known for their light music, the orchestra turned to two more serious composers of the time - Arthur Bliss and William Walton.

Bliss composed the music for the film of H G Wells' Things to Come and quickly arranged a suite of six movements suitable for the concert hall. The orchestra responded superbly to the composer's vivid and highly colourful music, particularly in the sections called "Attack", "Pestilence" and "Machines". The final "March" has always been one of Bliss' best known works.

Walton's Symphony No.1 was premiered in 1935 (the same year as Things to Come) and the orchestra treated us to a thrilling performance of it for the second part of the concert. This work occupied the composer for four years, then rapidly became one of the most popular symphonies of that time.

The conductor, Andrew Morley, ensured that the orchestra were at their best for this brilliantly inventive work, which came to a rousing end with the fourth movement.

The Wolsey Orchestra has an admirable commitment to providing a platform for local soloists and the combination of an attractive programme and Ipswich soloist resulted in an enthusiastic audience in the Corn Exchange.

Before any thoughts on the music, a word of praise should go to Rosy Payne for her excellent programme notes.

In La Forza del Destino the brass and woodwind had power and bite and conductor William Carslake drew the differing moods and tempi into a convincing whole with his clear and authoritative beat.

Brahms' Violin Concerto is at the summit of the violin repertory (Beethoven or Brahms - Everest or K2? is an intriguing debate). Taking up the challenges of technique and interpretation was eighteen year old Rosemary Hinton, already with two years experience as co-leader of the National Youth Orchestra. The introduction allows ample time for soloist nerves but Rosemary was calmness itself as the downward semiquaver figures propelled her to her entry. The opening ascent was strong and confident, settling into a sweet toned reprise of the opening theme. She continued to play with astonishing command and control, the multiple stopping holding no fears for her. The woodwind distinguished themselves with accurate and sensitive playing in the wonderful slow movement while Rosemary weaved a delicate yet secure thread around the melodic line. She and the orchestra fully captured the earthy vigour of the finale and the performance was a triumph for everyone concerned. Rosemary is a violinist of outstanding abilities with the personality and poise to achieve a great deal in the future.

Elgar's first symphony opens with one of his finest tunes and conductor and orchestra invested it with just the right proportions of nobility and restraint. In the Allegro the depth and complexity of Elgar's orchestration was fully realised and the mercurial mood changes of the scherzo were effectively done. The slow movement and finale both enjoyed passages in which the orchestra produced a blazing, fully rounded sound and the hectic closing bars gave a final flourish to an excellent evening.

As soon as the opening bars of Britten's Evocative Four Sea Interludes, were heard, the audience knew they were in for a fabulous evening: From the rising excitement of Dawn, through Sunday Morning, the brilliance of Moonlight to the thunderous violence with powerful effects provided by the percussion section, of the Storm. This was a superbly atmospheric performance by the Wolsey Orchestra and Leader Jamie Foreman, in this new concert hall.

Rachmaninov's Symphony No.2 in E minor was written in Dresden (1806-7). As from the beginning, the entire orchestra was in complete unity with conductor Ben Palmer, whose superb direction and encouragement were followed with absolute precision. This was a magnificent performance: From the intensity of the opening dramatic movement, the energetic scherzo, the breathtaking adagio with its beautiful clarinet solo, through to the summing up of the entire work in a grand sweeping finale. As it said in the excellent programme notes "The overwhelming feeling of a triumphant and joyous homecoming".

Thunderous applause was testament to an exceptional evening of wonderful music, exquisitely communicated to an appreciative audience.

First up was Momentum, by Woodbridge composer Christopher Wright, who described it as "a concert opener...which does not pretend to be profound, but offers a moment experience." It was much enjoyed and gave the orchestra the opportunity to show its virtuosity.

Gerald Finzi's gorgeous Clarinet Concerto requires delicate balance between the clarinet and the strings. This was beautifully achieved by James Meldrum, a young, local musician now rightly making a name for himself here and abroad, and conductor Andrew Morley, whose careful control of the strings created a wonderful strong, elegiac tone.

The second half of Saturday's concert comprised Pyotr Tchaikovsky's Suite No.3 in G Major. Composed when he was recovering from depression, it perhaps lacks the emotional depth of his symphonies. Nevertheless there was much to feel and enjoy in this performance; a great variety of mood and virtuosity, with the dance-like Polacca bringing the evening to a brilliant, triumphal end.

What a bright start to a wonderful evening of 20th century music.

Gershwin's An American in Paris is a blend of two different cultures and the Wolsey Orchestra captured both with the brashness of the big band and jazz sequences, plus the sensitivity of the orchestra, in a way that delighted the audience.

Kerenza Peacock is an Ipswich-born young musician now making good on the international stage and was greeted enthusiastically when she came out to play solo in Barber's Violin Concerto. The second movement is particularly beautiful and melancholic and she achieved a breathtaking intensity, sustained in the quicksilver but all-too-short last movement.

Rachmaninov wrote his Symphonic Dances in the last years of his life, at the start of the Second World War, and while they do not necessarily have the fireworks of his earlier works they are full of beauty and innovation.

William Carslake was in total control of the orchestra's forces and mesmerised with his sensitive interpretation and expressive conductor's dance on the podium. 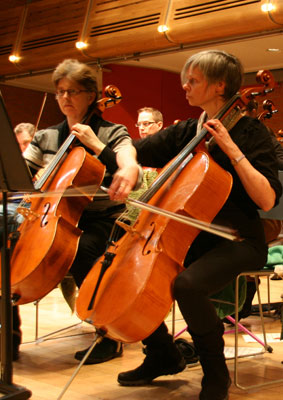 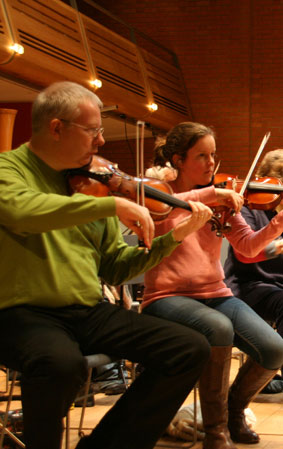 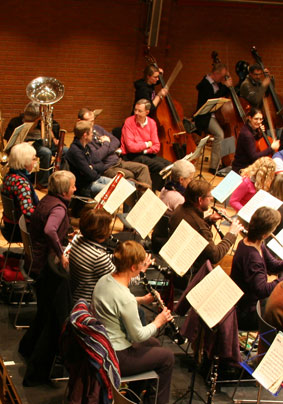 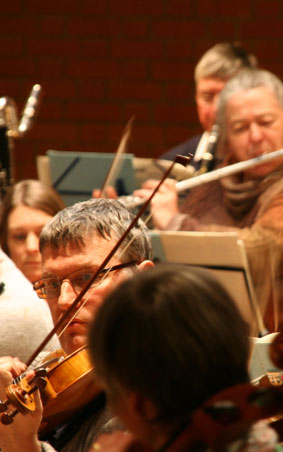